A few years ago my Mum came to cheer me up and I decided to spoil her with High Tea at the Burj Al Arab.  At that time we were seated in the main lobby. Since then my Dad has complained endlessly that he has not had the privilege of going to the Burj for High tea with me. As Dad was here to visit last week, I put right to wrong.

This time when I made the booking they offered us a seat at the Skyview Bar. Of course I couldn’t decline this kind offer. I didn’t get the obligatory email with reference number, so had to call to obtain it the day before our reservation as you cannot get into the grounds of the Burj Al Arab without this number.

Once in, we weren’t offered the Majool date you used to get on entry but were advised by pretty ladies where to go to get the Skyview Bar lift.

Once up we got to the bar, we were seated by the window (I had requested for it and thankfully got it) with a view of the Palm and the World. Dubai would have been nicer but hey we got a view.

The tea menu is no longer as expansive as it used to be and had a page of wellness teas. Firstly, yuck and second who is going to pay AED495 for wellness teas when you are stuffing your face with cakes, sandwiches and stuff.  We started off with date tea (it was ok bit datey) and I had the Jasmine Pearl tea. It was ok but after a while all the Chinese tea tastes the same to me. Maybe I’ve been spoilt for too many years drinking the expensive stuff given to us as presents from Dad’s mates. You can try as many different teas as you like during the High Tea so we tried a variety but ended up liking the English Breakfast tea in the end. You can’t change us Brits.

First course was shortbread with fruit. Buttery but not too rich and with the tartness of the fruit was a nice start to the tea. 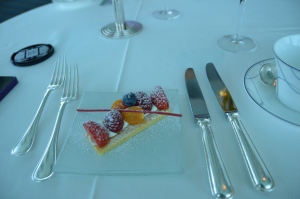 Next up was stuffed turkey from the Chef’s carvery. Being December and nearly Christmas there was a theme of Christmasy things for the tea.  The dish was lovely and would have been nice to have more but anyway.

Turkey from the Chef Carvery

We were able to have more helpings of the sandwiches as they brought a giant tray with them. I had a few more of the chicken tika, beef and tuna sandwiches.

The next course was scones and pastries. The scones were accompanied by  date, passion fruit (yuck) and strawberry jam along with Devonshire Cream. I’m a purist and I was very happy with the Devonshire Cream and Strawberry Jam.

The cakes were mostly coffee based and ok. Nothing spectacular to write about. I find pastries in Jumeirah hotels are always a disappointment.

On the bottom row of the Burj plates were muffins, chocolate chip cookie and crème brulee. The crème brulee did not have the crisp sugar topping which Dad and I found akin to blasphemy. How can you not have the sugar crisped top!? It’s wrong. The crème was lovely but it wasn’t perfect. The cookie was nice and soft and the muffin; it’s a muffin what more can I say. 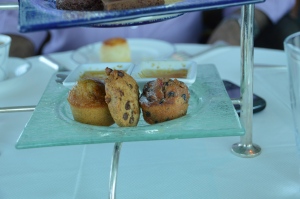 Whilst we were getting a sugar fix we also were offered Christmas cookies, which had some bizarre non-sensical names, which could have been German. They were nice enough especially dipped in our tea (told you we were too British).

The final course was a lychee and rose sorbet. I am not a fan of lychee based products and drinks. Give me a lychee and I’m fine, anything more and I’m not amused. We also received a box of chocolates to take home. I kept that unopened to give to Mum as she wasn’t able to join us on this trip.

Chocolates and Rose and Lycee sorbet

Have to say the Manager was very good (looking [sic]) at the end of the meal about trying to sort out the lack of Sirius card still from Jumeirah after all these years. Haven’t heard from Jumeirah since last week so I’m betting that after 8 years I won’t be any closer to getting rid of my temporary card. :S

All in all the food was nice and we had a good time. The staff were really friendly and patient with us and our multiple tea requests. The place was mostly full of tourists. One lady thought that wearing a see-through white top and see-through trousers was a great idea as she had a see through shawl on top. It’s never acceptable. I have no idea how she was allowed into the Burj. A family next to us decided to call Scotland and Pakistan and boast they were at the Burj for most of the tea which was piss annoying. Fine, yes you are excited but seriously?? Otherwise me and Dad had a lovely very genteel time.

Here are some photos of the Burj just to prove we were there.