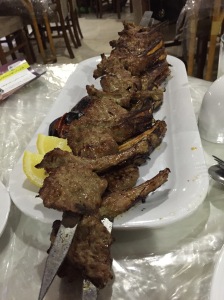 The best lambchops on the Island

Last month my good mate G and I went to Kish Island, Iran for the weekend (she wanted a cool new stamp in her new passport!).

We have visited most of the Middle East at some point over the years, so our choice was limited. However, we found that we could see Iran without a visa, as Kish Island is a freezone, and the flight is only 1 hour from Dubai.  We flew on Kish Air which is scary! The plane is old and seems like it should be in the scrapyard but it got us to and from Iran in one piece!

We had seen that you had to cover up as a woman to go to Iran, so we decided to buy new abayas. Wearing our abayas (with simple leggings or jeans and a top on underneath) all weekend was the best thing ever. Our suitcase has never been so light and it was so easy to get dressed every day! However, we were more covered up than most of the women on the island! As you can see from the vlog i finally mastered how to wear the shayla on my head as well without it falling off too often!

The first day we saw the area around our hotel and also went on a free tour (provided by our hotel) around the island. The tour included a trip to see a Greek ship that went aground by the island (it’s a windy tourist destination!) and an underground cave which was supposed to be a new town!

A part of the underground cave

We ate well on day 1 going to two good restaurants and eating lots of kebabs and rice (with butter on it). The lamb chops in the picture above are the best on the island…supposedly and we can confirm they were amazing plus the singing men were not bad either.

As we had seen the island on day 1, we decided to go to the ladies beach. On this beach we saw more nakedness than you would see in a nudist beach in France but without comfortable sunloungers! Also there were several security women happy to touch us up to make sure we werent smuggling our cameras or phones onto the beach. As my life is on my phone it was a pretty boring 3 hours on the beach. G was happy reading her paperback book!

Talking of life on the phone, nearly everyone had a Samsung or Iphone in their hands (embargo pfft) but unless you have vpn on your phone there was no way to access Facebook or Twitter (however you would get Facebook notifications – so annoying). Whatsapp worked fine which was good and they had wifi in certain areas of the hotel and in cafes.

Anyway here is Kish Island with a bit of commentary by me!

© 2015 Shelina Jokhiya | All rights reserved – This post is provided for the convenience of Shelo’s Cheeky Rantings readers. Any reproduction of the content within this feed is strictly prohibited.