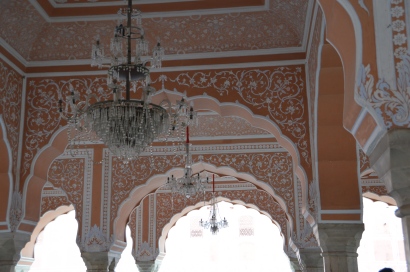 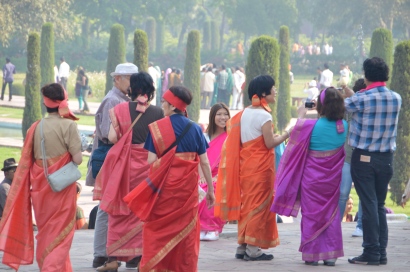 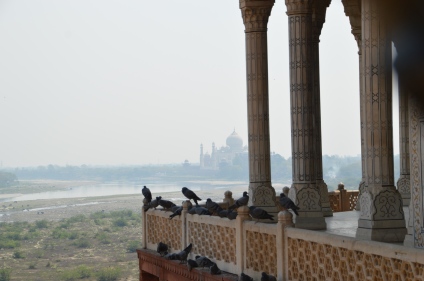 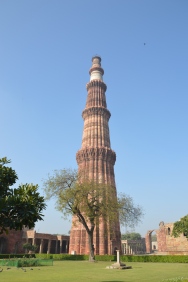 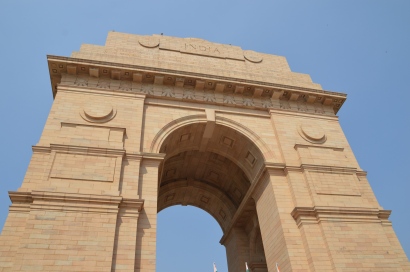 Last weekend I went back to India to explore the North and see some of the famous buildings India has built. Once again I went with a group of mostly single people through Escape Travels Dubai. Some of the trippers have become good mates, as we have been on other trips together and bonded, the rest were the normal “socially inept” expats that bring so much joy to the rest of us (sic).

Our journey commenced from Delhi, where at 4am we jumped on a coach and made the long 5 hours journey to Jaipur.

Our hotel – Royal Orchid – was lovely and 5*, so suited me to a tee. I was on my own as I cannot share with some stranger unless it’s a gorgeous man. The bathroom had a lovely clear glass wall which would have been embarrassing for members of our group sharing rooms with others.

After a bit of a rest, we went to Jaipur Old Town and visited the Fort made of beautiful red brick and designed with ornate designs. I couldn’t recall all of what we were told about the place, as I was slightly too tired, hot and busy testing out my new super duper lens (with no training) but lets just say it was lovely. I have pictures to prove it 🙂

There was a chance to do overpriced shopping in the Fort itself. At one point a lovely lady in our group was on the brink of buying a 100% silk sari from a vendor. I had a feel of the sari and it was not silk (more like polyster) and INR3000; it was too much for what it was so I was a bit blunt with my disgust at the sari, which pissed the vendor off, but made me laugh (the lady didn’t buy the sari) 🙂

We were then able to go to Jaipur market and try and get some bargains. The rest of the group went running to get tourist tack whilst I dragged my friend Gillian to go to a sari shop. If you have never been to a proper sari shop in Dubai or India, you must. You get the men to show you loads of different saris (i was looking for a lengha sari) and try them on you to see if they suit you. I feel bad that they have to fold the saris back up later, but hey we had fun and I convinced Gillian to buy a sari and I bought a weird new designer sari for a 16 pounds! Bargain.

In the evening we had the joy of going to a Rajistan dance and dinner thing. The show was not bad but the food sucked massively. I was hoping for rich spicy curries to melt in my mouth but they had made food to accomodate the expats who can’t handle the spice. To say the food was tastelessly shit would be an understatement. Plus on our table we had an old bag sitting with us complaining non stop, but grabbing the food like she had never seen food before. We were glad to leave that place.

The next day we went to the Amber Fort. To get up to the fort you have to ride an elephant which is brilliant. We were in luck that we had a Michael Schumacher wannabe elephant who decided to overtake all the other elephants to get us to the top first. He was 25 whilst the others were older slower creatures. Good fun speeding up a massive hill.

The fort itself is beautiful and worth walking around. The views are spectacular and include a “great wall” of jaipur and lakes. It was tiring but we were lucky the weather was not so hot and humid to walk around easily. Getting down the hill you go by jeep which is as bumpy as getting on the elephant.

After taking some gorgeous photos we then jumped back onto the coach and started the next long 4-5 hours trip to Agra. We arrived in the evening at Jaypee Palace – another 5* star hotel but a bit old and ragged on the edges. We decided to forego the Bollywood dance excursion and instead opted for a relaxing drink in the bar watching people and talking about the trip so far. We then joined the group for another themed dinner. The food was slightly better but still mild flavoured. However, interpid Fajer discovered some chilli chutney which we mixed into all the curries we ate. Some of the group were planning to party in a room later, but quite a few of us were exhausted and wanted to get an early night in preparation for our early start to….

If you have never been and had no desire to go there, you will not get the excitement of going to see it. However, when you get there and you see it from afar and then up close it all becomes astonishingly awesome. The Taj Mahal is one of the seven wonders of the world and whatever the naysayers were saying on our trip, I thought it was one of the most beautiful buildings I had ever seen. The majestic beauty of it is indescribable. My pictures won’t help explain how awesome this place is. You have to see it to believe it.

Moving on we went to Agra Fort. Its ok. The rooms where the Shah who built the Taj Mahal for his wife was imprisoned (by his son!) were opulently fabulous. However, its not the end of the world if you don’t go see the Agra Fort.

Next we jumped on our coach and guess what, we had another 5 hours drive to Delhi.

Delhi – what can i say about Delhi. I didn’t want to go on this trip because of the rape stories coming out of Delhi. Even up to the day of leaving i was freaking out about Delhi. Delhi is noisy, messy, smelly (people pee and shit in public everywhere (same in Agra and Jaipur and most probably most places in India)) and every other subjective you can use but its something to see. We stayed at the Crown Plaza Okhala which was the blingest of our hotels and a good end to our hotel stays but we were warned by the hotel staff to not walk around the area as it’s not safe.

I obviously wanted to go shopping for more saris so asked the concierge to assist finding an area for us to go to which was open for shopping on a Sunday (Easter Sunday as well!). Between a few of the staff, they found Lagar Najpath would be open and organised taxis for the 7 of us going. Four of us were lucky that we got a taxi driver driving an ambassador which was awesome. The two drivers agreed to stay at the shopping area waiting for us to shop and return to take us back to the hotel. To wait they would be paid 50rupees an hour. – thats 60p. We were so not going to argue with that. Because we felt safe in the knowledge that we had drivers waiting for us we were free to wander around in two groups and do our shopping. Four of us went sari shopping and picked up some gems and then due to us not finding anywhere good to eat, left the rest of the group and returned to the hotel to finally have some hot indian food. The rest, whilst we were slightly worried about them, were fine and returned an hour later after shopping for touristy stuff.

Our little group decided to not going to the bar/club with the others and had a late dinner and then went to sleep again. If you think we were boring, travel by coach across two states in India, walk around loads of old buildings in the heat and then tell me if you don’t become exhausted.

The final day we spent going around Delhi and seeing the beautiful Qatab Minar and the old colonial places. The “Britishas” as our guide kept calling them built a lot of the grand buildings in Old Delhi which seem to not be appreciated by the Delhites. It seemed to be a thorn in their side that the Britishas had built massive roads, well proportioned buildings and a sewage system. There is no pleasing some people.

One of our final stops was to India Gate which was built in memory of all fallen Indian soldiers. There was a parade of army people doing stuff every 10 minutes. It’s ok to watch for 5 minutes, max. The final stop was to a Gurdwara which was nice. As always Sikhs are welcoming to all and it was nice to walk around but the heat and tiredness had got to a lot of us by the end of this visit.

Being in India you see the poverty and the dirt, which was depressing. I saw signs in Agra and Jaipur about “Clean Agra, Green Agra” with rubbish piles under the sign. The irony seems to have gone unnoticed by the locals. I hope that the area could be more like Kerala which was much cleaner and beautiful but I fear the corruption and other factors will hamper the growth there. However, saying all that the trip was amazing and we saw beautiful buildings and people. If you go with a group and are sensible you will have a good safe time in India. Don’t be stupid and don’t go alone especially if you are a woman and enjoy Incredible India.