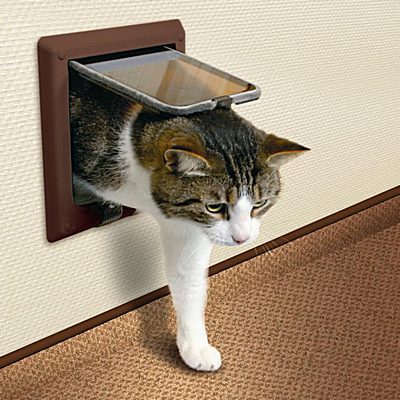 I have a problem. I have a cat invasion going on in my house whilst I am away. To make clear, I am not becoming a sad, pathetic cat woman!

The problem started recently. Due to the lack of cat flap and the requirement for my two cats to be go in and out of the villa as they please, I have been keeping the window slightly open for their ease of entry.

Recently, I came home late at night to find two other cats (black/grey and ginger) waiting for me to get in the house. Then one of them decided to silently invade and follow me around the house. It was unnerving and this cat was acting way to comfortable in my pad for my liking. I had also been wondering why the food was going so fast. My little one has a bit of an appetite but not that big!!

Anyway it turns out that while I have been away that the two invaders have decided that my pad is their casa and that they will eat, poo and sleep there. This has resulted in my older one going to live with the landlord and his family  and the little one running around the garden away from her home or staying with @mich1mich.

To solve this problem I think its time I get a cat flap to give my cats access into my bloody home But there are various problems to this solution. The main one being whether my landlord will allow me to put a flap in my door. I’m hoping he loves the two cats enough now to think its a good idea for me.

The other problem is the choice of flaps. Do I get one which reads their magnetic chip (will it work with their UAE chip), one with collar with chip or just a four way door??? Do you need to get a tunnel? The one which figures out the cats from their chip is 80 quid! Thats like a ridiculous amount. The collar one is 30 quid which is slightly better.

Blimey it’s mad. I just need someone to go out for me and buy the damn thing and fit it in for me. Any offers?

So if you have any advice on this cat flap dilemma and/or want to convince my landlord that I should get  a cat flap put in my door, please let me know.